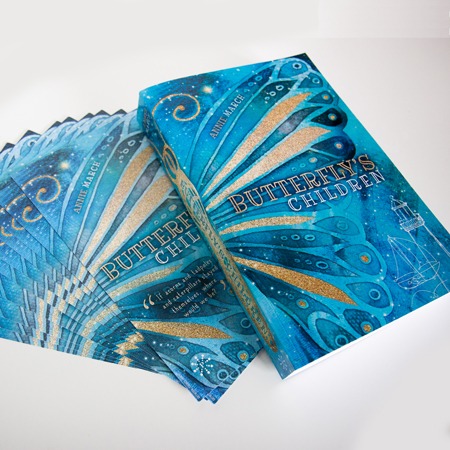 Book One of the Thalassan Trilogy

Planet Thalassa – seven light years from Earth and four centuries in the future – is transforming from an anthropocene to an ecozoic culture where wealth is construed as pure air, rich tilth, clear water, a glory of biodiversity; and human violence, thanks to Redound Syndrome, which triggers perpetrator death by endocrine meltdown, is all but extinct.

The story constellates around the young heroine, Meriel, whose flight from her own demons implodes in shipwreck on an island that doesn’t exist. Other characters and artefacts: an intergalactic unicorn, Universal Male Contraception, splendid cats and crones, and xirilliry-hulled Light-ships skimming the sea like dragonflies.

Butterfly’s Children is political, metaphysical, redemptive, richly imaginal. It includes an Understory (planetary guide), a dictionary and alluring maps. It’s been 35 years gestating, and is my viaticum to all the children – albatross chicks, sapling Huon pines, tadpoles, lion cubs – of this beloved, beleaguered Earth.